The Commission released today its evaluation report on the implementation of the Regulation on unjustified Geo-blocking, which has been in application for less than two years (since December 2018). Creativity Works!, a leading European coalition of the cultural and creative sectors, welcomes the Commission’s thorough evaluation which concludes that the available evidence does not warrant a modification of the Regulation’s scope.

We are encouraged by the recognition of “different market dynamics” in our sectors, that the “beneficial effects, in particular for consumers” of an extension of the Regulation’s scope are not clearly demonstrated and that the licensing and legitimate geo-enabling practices which underpin Europe’s Digital Single Market continue to be fully justified.

The creative and cultural industries (CCIs) have been one of the sectors most affected by the COVID- 19 pandemic. However, CCIs have also proven their resilience and their importance in the everyday life of European citizens who have been enjoying – during these arduous times – 70 million musical works, on more than 200 licensed digital services; over 3,000 On-Demand Audiovisual Services (VOD); more than 2 million e-book titles; and countless images making the internet the vibrant and engaging place we currently enjoy. Video games have also delivered experiences that enrich the daily lives of more than 54% of all Europeans. European citizens going back in number to cinema, bookstores etc after the first lockdown is further testimony of the importance of culture in their lives.

Laura Houlgatte adds: “The recent Council Conclusions on safeguarding media pluralism recognise the crucial role of territoriality and exclusivity1. EU decision makers also recognised the creative and cultural sectors as a strategic industry for Europe in May 2020. We rely on them to continue to support a key enabler of content creation, production and distribution.”

Note to the Editors

The creative and cultural sectors are a European strategic asset, and a significant provider of jobs and economic growth. According to the EUIPO/European Observatory, CCIs generated approximately € 509 billion in 2018 and represented 5.3% of the EU’s total GDP before the COVID-19 crisis. CCIs employ 15 million people2 (directly and indirectly), representing 7.5% of the EU’s employment workforce and making our industries the third largest employer3 sector in the EU.

Find out more about the coalition at www.creativityworks.eu 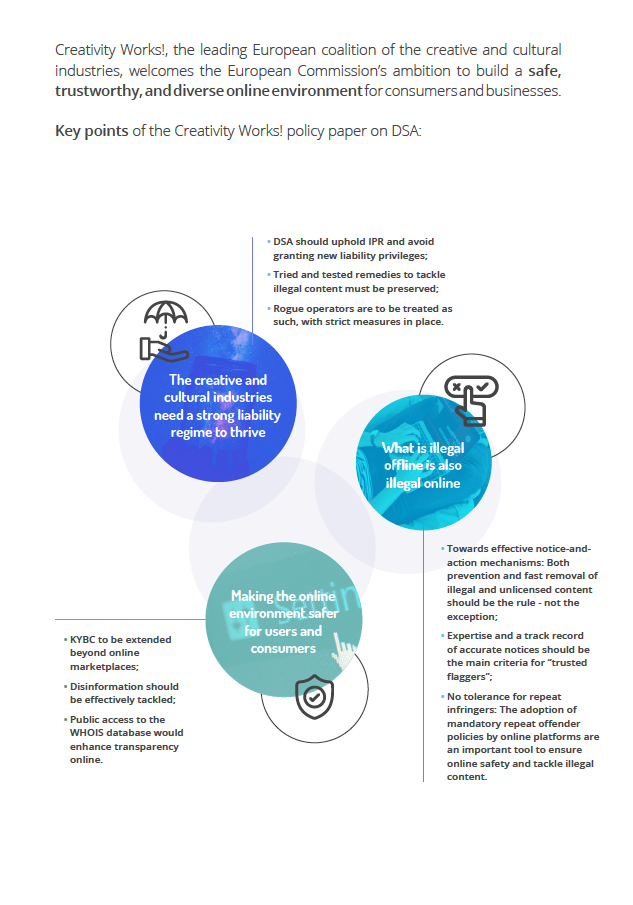 The Digital Services Act: building a safe, trustworthy, and diverse online environment for consumers and businesses