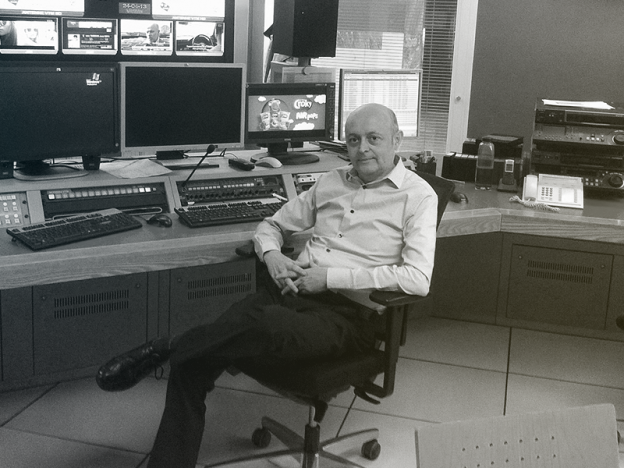 What is your background?

In 1988, I got the chance to join some colleagues to launch the first Flemish commercial television channel, VTM, and I have been there ever since. Now I am the supervisor of the programme scheduling team – I supervise the team of broadcast controllers, “la régie finale” of what is aired. I like to say I’m one of the last Mohicans: we started with fifteen persons more than twenty years ago, now we are about 450 people. I am one of the last survivors from the beginning. I survived all changes.

For each channel we have a programme schedule that we get from the programme direction; the scheduler makes the playlist with all the information necessary to go on air and get a seamless broadcast. It’s where content meets the technology.

TV is constantly evolving, which means the job never becomes a routine. Competition between channels means viewers always want something new. Strategic planning is a competition with other channels – it can be an adrenaline bomb. For example breaking news can change everything. And we need to adjust better and faster than our competitors. This makes it interesting. That’s what I like. It’s like a good movie, you can’t see in the beginning in which direction the plot is going.

Sometimes people say “television is dead”. But I think it’s more alive than ever. The time when you had to go home to watch TV is gone, now you take television with you on your mobile, your Ipad, your laptop. Video-on-demand and new technologies, makes television indispensible. The bouquet of products a media company can offer to viewers is still growing. The future is bright.

WHAT WOULD YOU BE DOING IF YOU WEREN’T IN THIS JOB?

I really can’t see myself work in a different sector. I wanted to make television since I was ten. As a kid I made movies and tried to learn about television. When I first entered a studio, it was like entering a new universe.