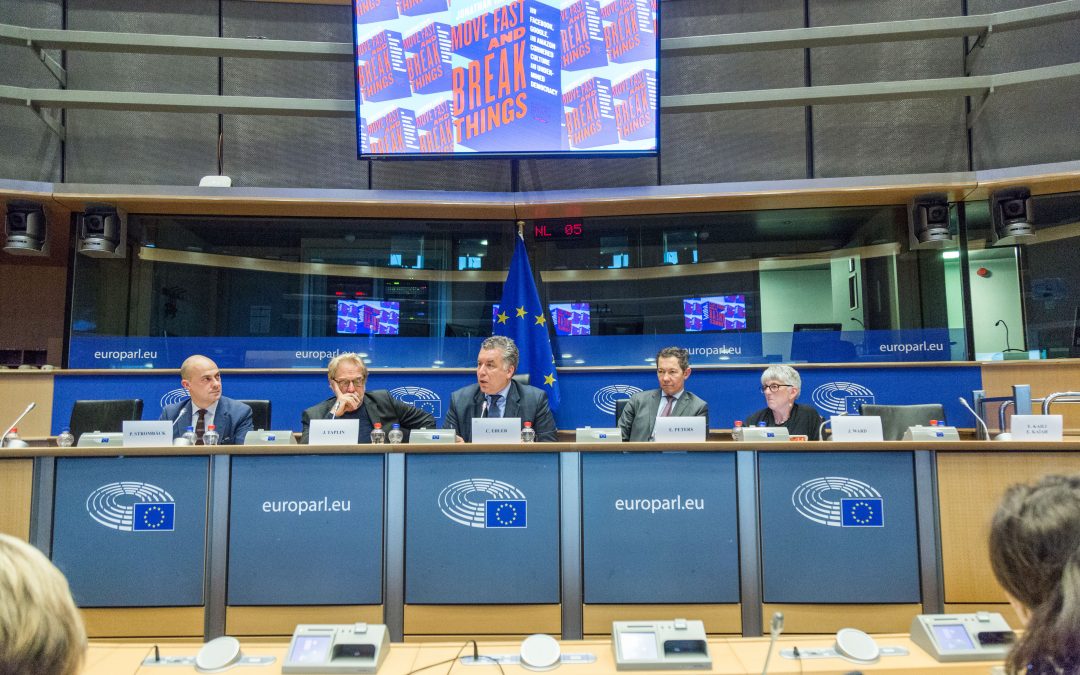 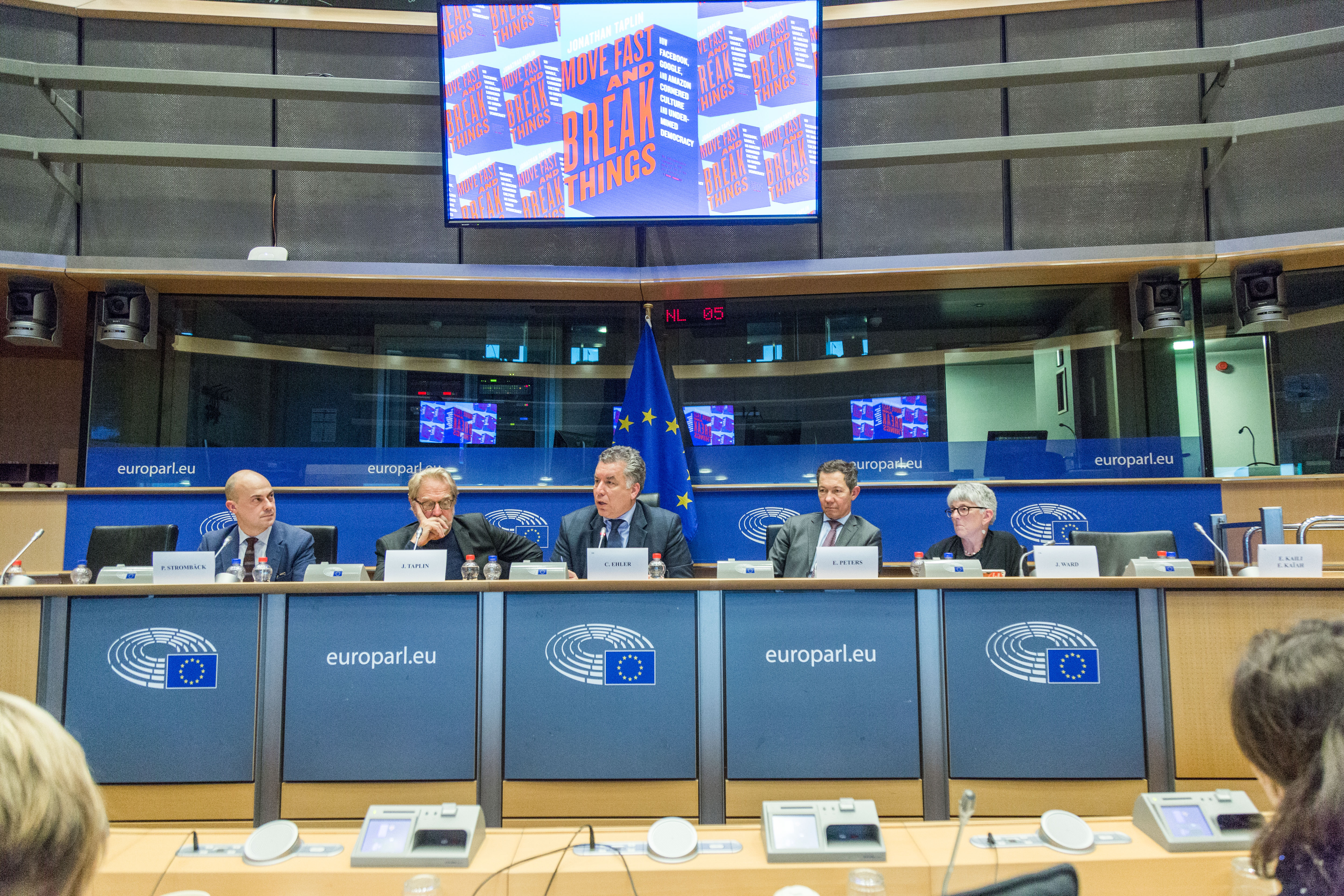 Online platforms are an integral part of today’s digital economy. They increase the speed at which information is shared and introduce consumers to a wide variety of digital goods and services. But their dominant rise casts concern about the largely unregulated role they play in disseminating creators’ content and raises questions about what steps should be taken to safeguard a fair and competitive online ecosystem.

We debated this topic at an event hosted by Dr. Christian Ehler MEP in the European Parliament with our keynote speaker, Jonathan Taplin. An American film and music producer with a CV that includes Bob Dylan, Martin Scorsese and Gus Van Sant and Wim Wenders, Taplin has been raising awareness about the implications of unregulated big tech. His book “Break things and move fast – How Facebook, Google and Amazon have cornered culture and undermine democracy” examines the monopolistic character of online platforms and their ability to earn large profits with minimal accountability, often at the expense of creators and their business partners.

Joined by Eric Peters from the Cabinet of Mariya Gabriel, EU Commissioner for the Digital Economy, and Julie Ward MEP, we uncovered the state of play for online platform regulation in Europe. Our panel debate between these experts observed the view towards platform accountability in a fast-paced world where the benefits of innovation must be balanced with the preservation of a level playing field for all stakeholders.

In his keynote speech, Taplin explained the impact online platforms have for other, smaller players. In 2017, only companies owned by Google and Facebook received 88 cents of every dollar spent on online advertising in the United States, leaving little left for the creators behind the content that follows this advertising. This, Taplin suggested, is a direct consequence of the monopolistic nature of large tech platforms, making it difficult for today’s journalistic and entertainment business models to compete.

Taplin also touched upon the growing use of social networks as platforms for hate speech, fake news and terrorism, a notable problem as anonymity can make it a challenge to prevent ill-intentioned platform uses. Google’s YouTube platform, for instance, has been utilised to spread hate speech, neo-Nazi music videos and Jihadi propaganda, though identities behind the uploaders of such videos may remain unclear.

Advanced technology could also see platforms being increasingly used as distributors of “deep fake videos”, a danger should they be used to spread misinformation. Taplin supported this with one such video that concerningly demonstrated how easily the words of former American President Barack Obama could be manipulated. In such instances, a better dialogue between platforms and the creative industry might help avoid these misuses.

In joining the discussion, Dr. Ehler stated that “the shaping of the creative industry will be a topic for the 21st century, we are not just doing copyright, we are talking about the terms of trade, for artists, creators & their business partners”. This, he noted, is accomplished by defining the importance of copyright and identifying other challenges facing the digital market in the next decade.

Dr. Ehler’s panel contribution suggested we are witnessing the first signs of internet capitalism – an environment that is not driven by consumption and re-investment, but by the ways we express our personalities online. Online platforms not only work as distribution channels, he noted, but suggest what to buy, all the while producing the products they advertise. Dr. Ehler suggests this system is vulnerable to manipulation – “it makes perfect sense to control the attractiveness of products if you have the power of distribution”. Platforms have become a type of “technological superpower”, which eventually leads to a new dimension of control. 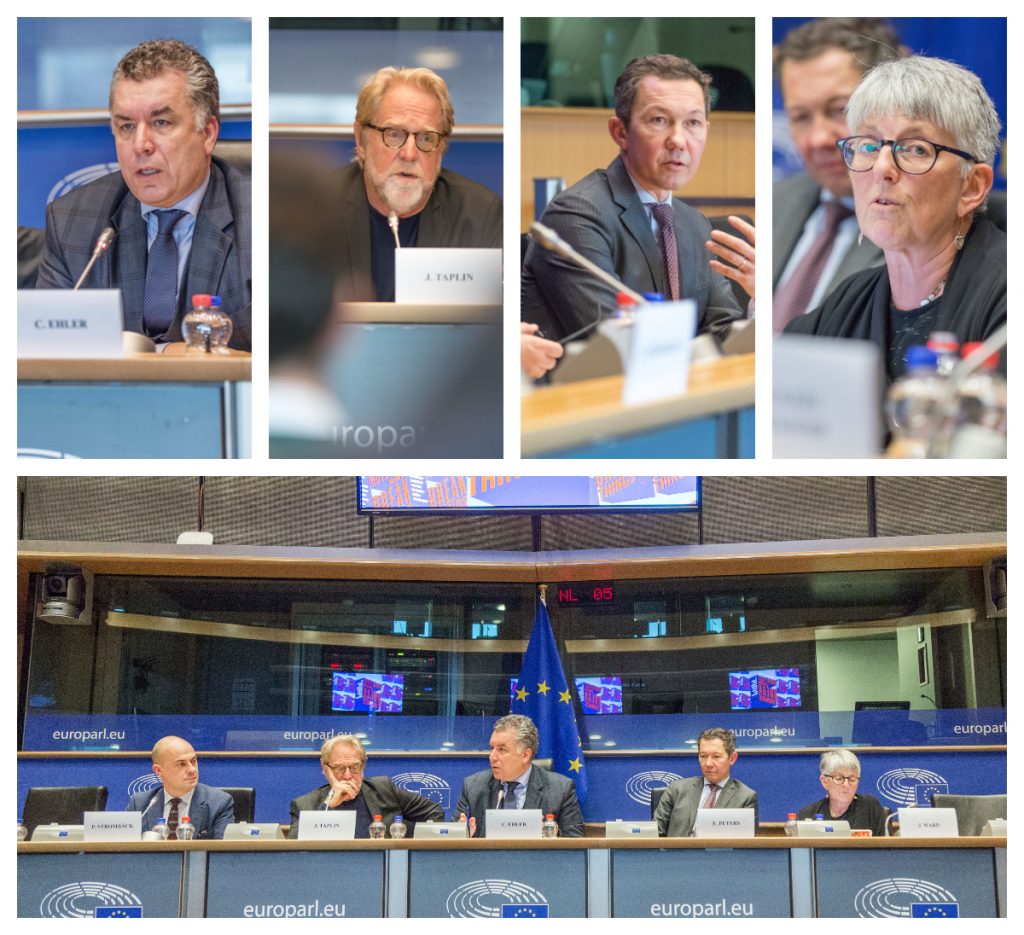 In line with the European Commission’s aim for competition, Eric Peters underlined that, as with any technological revolution, the online digital transformation requires work to preserve fairness that puts Europe at the edge of this technological age. Social welfare, or digital inclusiveness, also holds an important place for equal access to services. As Peters states, only a few platforms have the capacity to direct users to information or services, and at times for harmful reasons (e.g. terrorism). For this reason, they need to be more responsible concerning the way they are managing content and the services they are providing.

Peters’s vision of a European champion in the new technological age reflects a belief that the EU can still rival the digital sophistication of the American and Asian markets, so long as it can take steps to preserve European values within the online ecosystem. He noted, “in any code there is law, in any code there are choices which are linked to values and this is exactly where we need to jump because there is no way the EU ecosystem is evolving outside of our values”. 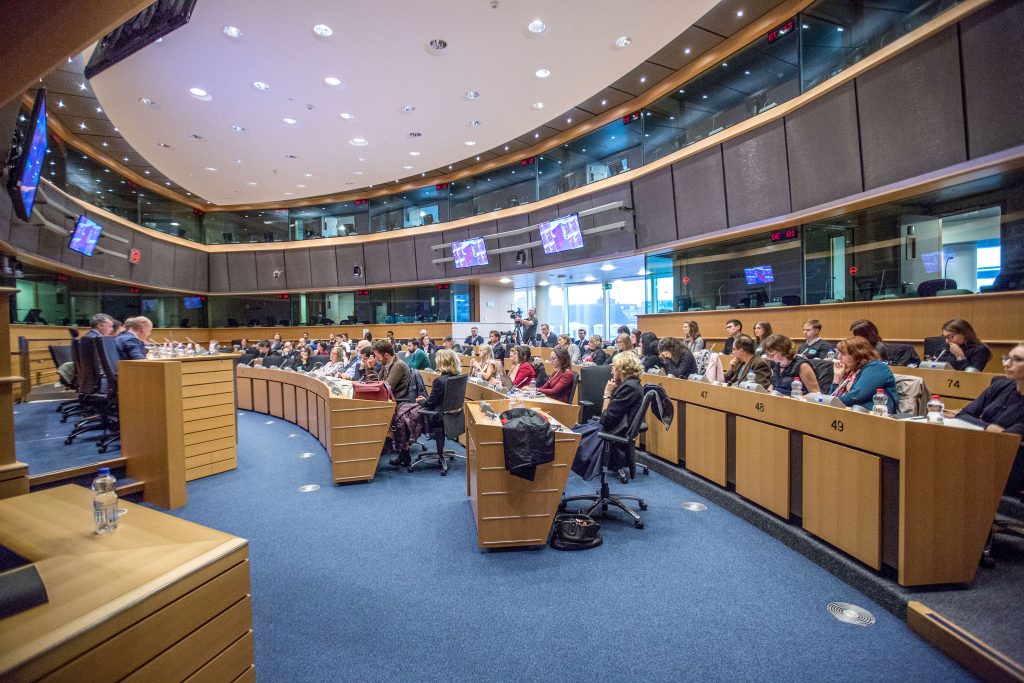 There is moreover the importance of cultural creativity, which Peters highlighted as not only a boost for European jobs and economic opportunities, but also a means by which culture can remain a key part of today’s society. Behind this is the commitment of European Commission President Jean-Claude Juncker, Peters said, to ensure the creativity sector thrives in Europe and that creators are adequately compensated for their work.

Julie Ward MEP seemed to share Peters’ view, stating that artists are fundamental for society and, as a result, policymakers must protect their means of livelihood. She noted legislators have been slow to respond to technological changes, leaving Europe’s creativity sector, as well as the privacy of Europeans, vulnerable to misuse of large tech platform’s technology. Scandals such as Cambridge Analytica, and online interference with political elections and democratic processes, are just some of the incidents that demonstrate the need for this type of intervention.

As our debate showed, the prevalence of large tech platforms requires policymakers to carefully measure the benefits of innovation with the values Europe holds in fair competition and data protection. Digital copyright rules are one way to achieve this, and the European Parliament’s vote this past September for the EU Copyright Directive is a first step. Europe’s leadership in this area may yet spill over into the United States, and we may also see other areas where platform “self-regulation” is deemed inadequate, such as with illegal data harvesting or terrorist content. Bringing policymakers and stakeholders together on these topics can help ensure the right steps are taken to achieve a healthy online ecosystem for everyone.